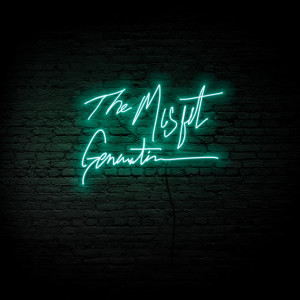 You may have known them as simply Social Club, but the duo from Miami has returned as newly signed artists under Capital CMG and with a new name Social Club Misfits. For those unfamiliar with Social Club Misfits, the duo formed in 2011 and is made up of rappers Fern and Marty who are known for their energy and humor in their songs. This EP follows two successful independent albums, Misfits 2 and Us, released in 2014 and 2015, respectively. Both albums saw the artists chart in the Billboard 200 and Billboard’s Rap Albums charts, with Us topping at #9 on the Top Rap Albums. In a relatively short time, Social Club has amassed a close following of fans (known as “misfits”), and The Misfit Generation EP is a five-track project that should keep those fans satisfied until the release of the group’s next full album.

The first words you hear in “Wavemasters” sum up the “misfits” theme. Jesus Christ is described as a misfit who was “so uncomfortable with the state and condition of this world” that He was willing to die “because of His discomfort which was yours and my sin.” According to the group, Christians are misfits “by default” and have specific roles given by God. From “Dear Mama” to “All I Need Is You,” rappers have been known for writing songs about the women in their lives. Social Club Misfits uses “Marriage Goals” to rap about the importance of their significant others, hearkening back to when they first fell in love and outlining their dating and marriage goals.

In the EP’s first single “Courage,” the duo raps about finding the courage to conquer their fears. Fern spits a powerful verse about God’s work in his life, saying “I could’ve died like four times, but I didn’t so I know there’s a plan.” One of my favorite tracks from the EP is the emotional track “Kumbaya.” Rapping to a slow, trap beat, Marty expresses the doubt and stress he has experienced, saying “my yesterdays seem like better days.” Fern’s verse is more optimistic and reflects on the blessings God has given him (his family and talent), and he has a positive outlook for the group’s future. The closing and title track is really deep, featuring a hook coming from the perspective of someone feeling discouraged and contemplating suicide. Fern and Marty rap about struggling with low self-esteem and asking if others “can live without me.” Both conclude with the power of Christ’s love and the change He brought in their lives.

“Misfits” will not be disappointed by Social Club Misfit’s latest project, although they may expect more humor. To be honest, the duo was a lot more serious in this EP, and I personally enjoyed it. There were a lot of conscious rap elements, and this group is certainly not afraid to focus on personal topics. The beats in this record are solid and diverse as well, ranging from the banger “Wavemasters” to the soothing title track. New and old fans alike should find something to enjoy in this EP. It’s not a perfect record and fans may wish for more, but as we have come to expect, Social Club Misfits does not easily disappoint.