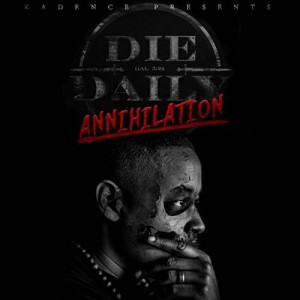 Die Daily: Annihilation by Kadence is a project that was birthed out of the necessity for change in his inner-city community of Eastside Oklahoma City, which is one the most under-served and under-developed areas in Oklahoma.

Kadence is not your average rapper that’s on the road 300 days out of the year. His main focus and vocation is being an urban missionary in OKC. Kadence still lives in the same house where he grew up so he can continue to be apart of the community that he’s trying to impact.

Kadence works with city schools as the Director of Youth For Christ in the OKC region and partners with other organizations that focus on ministering to the youth of inner cities. One of those partners is Urban Bridge, which is the non-profit chapter of the urban clothing line GrpFly. They asked Kadence to head up their efforts to build and sustain a youth center placed in the heart of Eastside OKC.

The mission of the youth center is to bridge the gap between the educational, emotional and spiritual needs of the youth in this area which government programs can not fulfill. This is where the project comes into play. Opening and operating a youth center cost a lot of money and needs a lot of publicity to survive.

Kadence hopes this project can bring the awareness this youth center needs as well as making sure every penny this project brings in is allocated to the financial goals of the Urban Bridge Youth Center.