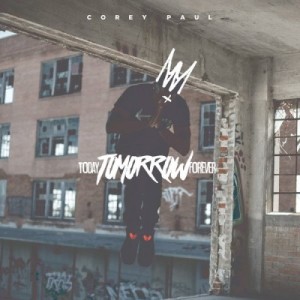 My mom has always told me “that it’s not what you say, but how you say it.” This timeless cliché is ever present in the music that we listen to. The songs that we hold closest to us are forever in our memory partly because of how the artist delivered the lyrics. We connect to a song because we believe the person. Their passion, compassion, understanding, etc. drive home the message and reach the listener on a deeper level. Delivery and passion makes the connection between listeners and artists.
Few artists bring passion to their music like Corey Paul. This is the most notable and memorable trait Corey brings to the table. Since coming on to the scene, Corey Paul has attacked every song with an intensity that cannot be ignored. His passion and intensity makes him more relatable. You can feel everything that Corey Paul raps about. Even if you don’t directly relate to the topic, you can still feel it. Corey has ridden this seemingly natural ability to a very promising career.
In a short period of time, Corey has made himself one of the brightest up and coming stars in all of Christian Hip-Hop. His debut record Grace Love Mercy was a strong project. That, coupled with some incredible features, led Corey to the surprising and even more exciting news that he was the newest member of Collision Records. On December 18th Corey released his debut album for Collision entitled Today Tomorrow Forever. With Collision at his back, this is Corey’s moment all of CHH will be checking to see what he is capable of with one of the best and most respected labels in the genre.
The album isn’t just all trap and bass. He really stretched himself on Today Tomorrow Forever. “Live to See Forever” featuring Jordan Jones is a much softer track. The keys accompany Jordan Jones voice beautifully. It is a different sounding track for Corey, but it is the perfect ending for the record. “Real Live Forever” is also a softer sounding track. It changes the mood and feel of the record in a great way. The Collision influence is felt on the intro “100 in the Summer.” This track is masterfully layered. It builds throughout the track and it’s with this fantastic crescendo. This sets the tone perfectly for the entire record. Overall, the production on this record is very good.
The cherry on top of this record is the lyricism and message. Hidden behind all of the energy, passion, and bass is a truly gifted lyricist and storyteller. Corey is capable of stringing together some jaw dropping bars. His delivery is flawless throughout Today Tomorrow Forever. That is one area where he has grown as an artist. He switched up his delivery several times throughout the record. That skill has rounded him out as a lyricist. He delivers a strong message on this album. It is one of hope and love.
This record has a bit of an edge to it. Corey is honest about the struggle of growing up in the hood. He tells stories that are raw and genuine. It can be a bit hard for people not familiar with that struggle to relate to, but Corey is also very up front about where his hope comes from. God is the main theme of this record. Corey makes it very clear that Jesus is the cure to all of life’s ills. “Live to See Forever” is the perfect example of this. You can worship to this song. It creates a mood where you are focusing only on God and his greatness and mercy.
This record has every element to it. It’s a solid record from start to finish. Fans of Corey Paul’s prior work will enjoy this record greatly. It also has elements to it that will draw in new fans. This is a record that is a good listen for CHH fans and a solid record for Corey Paul’s first record with Collision Records.