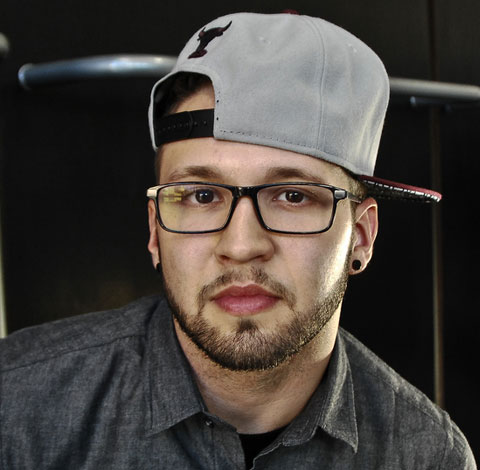 A native of Syracuse, New York, Mineo grew up in a single parent home and was a troubled kid who was kicked out of public school because of his anger issues and aggressive tendencies. Sports and music became positive outlets for Andy’s excessive energy. “I was more involved in basketball and football until one of my friends and I just started rapping as a joke,” he remembers. “We used to buy singles because we couldn’t afford anything else. When you’re 10 years old and you’ve got two or three dollars, you buy the CD single instead of the whole album. The CD single would have instrumentals, so we would just write our own raps to the instrumental on the CD. That’s kind of where my love for it began. My buddy got a program for the computer and we were recording in my living room. I put together my first rap and I fell in love with it the moment I heard myself on the beat. I said, ‘Man, I want to do this forever!”

Mineo became a hard-working young entrepreneur and not only recorded his own raps, but started a studio in his house where he recorded other young hopefuls. He became a local hero and at 17 had money, success and everything most young guys are looking to achieve. “When I got to about 15 or 16, I got all the equipment I needed to not only record myself, but have my friends come over and I’d record them,” he says. “Other people got wind of that and said, ‘Hey I’ll come over and I’ll pay to let me record,’ so I started doing that. The business kept on evolving. I started making more money and bought more stuff, moved it into my basement and built a full studio with one of my friends, who was a carpenter. We created a little ghetto basement studio. That’s how I made my money all throughout high school.”

Yet even with Mineo’s worldly success, there was still an emptiness and restlessness in his heart. He found what he had been looking for when his sister Mary went to work at a church camp one summer and took Andy with her. “I was surrounded by loving people,” he recalls. “There were a couple of guys that invested in me that summer, shared the gospel with me, showed me what it is to follow Jesus, and that’s when I had my first real encounter with Jesus.”

When he returned home, it was hard to grow in his faith. “All throughout high school it was really difficult to follow Jesus without having any community,” Mineo says. “I didn’t have any home church. I didn’t have any men to disciple me. Nothing. When I went to college is when I started to get that. In college, I got away from the situation I was in. God put me there and he put me around a bunch of people that loved God, people that looked like me and talked like me. They were into hip hop like I was and it was really a blessing to meet some of these guys.”

Mineo met producer Alex Medina (Lecrae, Trip Lee) who encouraged the young artist to check out T.R.U.C.E. “It was a group of young people that would gather on Saturdays to work on performing arts for the purpose of evangelism,” he says. “I got invited to come check them out at a rehearsal and there was a whole bunch of men there, people my age, and they all loved God. They were an encouragement for me to start walking with God again. They showed me that I could use my gifts for him. I didn’t have to live the way I was living. I didn’t have to make the music the way I was making it. I could actually use everything that I have for Jesus. I got connected with people that showed me that I could do more with my life and my music.”

Mineo is not afraid to be bold and not afraid to reach out and make a difference. In 2012 he and a friend planted a church in New York and now Christ Crucified Fellowship is a vibrant part of the community. “We’re steadily growing and seeing more and more young people our age come and get baptized. It’s exciting,” he says. “I think that’s why God made us this way. He hard wired us to love hip hop, to love people, to love culture, to love the inner city, so why not take all the knowledge and things that he’s given us and go teach it to people that need it, in places that aren’t being reached. That’s what made me want to plant the church. I have a passion for that and now that the church is up and running I’m able to fall back and focus more on my music because now other people are stepping into leadership.”

“I want to combine the message that I believe in deeply with the catchiness of these hip hop songs and choruses. I really think it makes a powerful combination to speak to the hearts of people all over the world.”